You all know that Apple is the company behind iPhones, iPads, iPods, Macs and more, but did you know that it once also built a games console, one of the many flops in its 38-year history? And this is one of the more well-known items of Apple trivia. Have much do we really know about our favourite California company? We've gathered together the most fascinating and surprising facts about Apple, so read on to brush up on your knowledge. We'll start with one that those who are very familiar with Apple as a business may already know, but we still think is a fact that many, many people won't know. Apple had three co-founders: Steve Jobs, Steve Wozniak and a third who many people won't have heard of: Ronald Wayne. Wayne left the company just 12 days after it was founded, and sold his 10 per cent share for just $800 plus an additional payout of $1,500. The most crushing part is that his share would now be worth more than $60 billion. Thankfully, now 80 years old, Wayne says that he has no regrets. 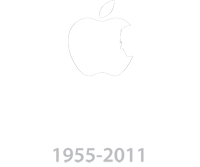 "The only way to do great work is to love what you do. If you haven't found it yet, keep looking. Don't settle. As with all matters of the heart, you'll know when you find it."